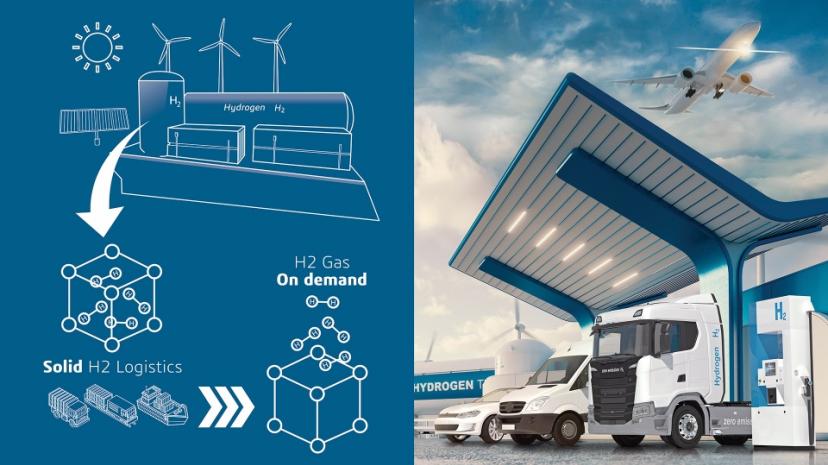 IF WE transport hydrogen at solid state, can it become the energy of the future?

Conventional H2 Logistics (Gas/Liquid) essentially “Fights the Physics” of Hydrogen, paying a massive price in high operating/safety costs and requiring massive infrastructure deployment in every segment of the supply chain.  As the world looks on to Hydrogen to play a key role in decarbonizing the planet, the supply chain WILL be massively stretched into many areas that do not have user volume or concentration to support such infrastructures.  We also have a fast-depleting carbon budget, limited time and limited resources – we clearly NEED an infrastructure-LIGHT clean energy ecosystem which can complement all the other climate solutions (mostly, if not all which are infrastructure intensive solutions).

Galaxy FCT has patented technology (worldwide pending) which facilitates RAPID and EFFICIENT release of Hydrogen gas from Solid H2 (NaBH4) which makes it practicable to anchor a Solid H2 Logistic Ecosystem.  This involves “packaging” H2 at point of production into a Solid Form Chemical (NaBH4) an bypassing the need to “fight the physics” (of H2) through carrying out all storage/logistic operations with H2 “embedded” within the solid form which is (a) energy dense; (b) non-flammable; and (c) stored/handled at ambient temperature without pressure.  H2 gas is released “on demand” at user location via an exothermic chemical reaction which does not require external energy input.

This provides efficient logistics which operates within an infrastructure-LIGHT ecosystem which can scale globally relatively quickly once the cost of “packaging” the H2 (which is currently high) is brought down through a combination of massive scale integrated RE farms dedicated to NaBH4 production (removing dependence on transmission) and more advanced/efficient production methods as well as recycling/ regeneration of “spent” NaBH4.  This decoupling allows us to harness the richest (highest yielding) locations on planet earth immediately in large scale which are typically uninhabited (deserts and wind-swept wastelands).

This facilitates the large-scale production of green molecules which is necessary to complement massive generation of green electrons delivered over the clean energy grid of the future.  Solid H2 Logistics will accelerate this process and be instrumental in immediately unleashing the full potential of renewables, especially Solar and Wind (perhaps Hydro and Geothermal as well).

Our vision is to accelerate the emergence and growth of Solid H2 Logistics so that mankind can have another potent tool in responding to the challenge of Climate Change. 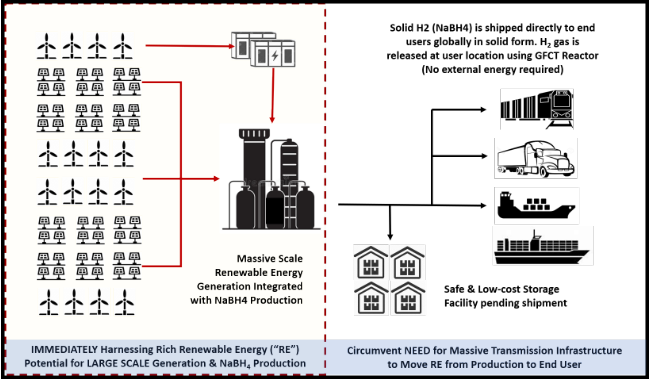 Making available massive quantities of affordable green molecules in solid form which does not require a massive logistics infrastructure.

BENEFITS TO USE THE 3DEXPERIENCE PLATFORM ON THE CLOUD

Galaxy FCT could benefit from the 3DEXPERIENCE platform and the software in two key areas:

On the other hand, R&D into Efficient Production of NaBH4/Recycling: Usage of Simulia to facilitate research with collaborating partners into improving the processes for unprecedentedly large-scale production of NaBh4 from renewable energy as well as processes for the recycling/regeneration of “spent” NaBh4 (i.e. NaBO2.XH2O) so that per unit costs of Solid H2 can be brought lower to fast track large scale adoption so that global decarbonization can be fast tracked.

Galaxy FCT is keen to collaborate with a large multitude of potential partners and/or stakeholders towards accelerating the emergence/maturity of the Solid H2 Logistics Ecosystem over time.  This is a deliberate and concerted effort to leverage many partnerships to accelerate the tipping point. More specifically we are pursuing collaborations in the following areas:

Universities & Research Institutions: Galaxy FCT has started research collaborations with the University of Malaya (Recycling/Regeneration of “Spent” NaBH4) and in advanced discussions with the National University of Malaysia (Improved “Mesh” Catalysts for GFCT H2 Generator).  We are also exploring possibilities of working with professors from major/leading universities (ideally from United States, Europe, Australia or China) on optimizing large scale production of Solid H2 (NaBH4) from low-cost renewable energy.

Renewable Energy Companies:  We are also looking to increase discussions/collaborations with companies in the RE space which could potentially benefit from the massive scale deployment that Solid H2 Logistics can potentially spark off.  This will also create a massive surge in demand associated renewable technologies (e.g. solar panels, wind turbines, electrolyzers, batteries and fuel cells etc) that will accelerate the growth trajectory of those industries as well.

IF WE use robot to 3Dprint your building, can we optimize your living space?

IF WE produce energy using sustainable sources, can we preserve our planet?

IF WE survey the earth with a network of flying sensors, can we better optimize the human activity?

IF WE have a vehicle that is ultra-modular, will we ever need to change our car?

IF WE open the sky, can we change the connected world we live in?

IF WE have an innovative mobility solution designed for all, can we get rid of wheelchair stigma?

If we keep vessels clean from hull fouling, can we cut back on maritime transport CO2 emissions?

If we create façades that behave like the human skin,  can we reduce the energy consumption of buildings?